What is a Vasectomy?

Why have a vasectomy?

Vasectomy is a permanent form of sterilisation, which is very reliable. It is safer, easier and more effective for a man to have a vasectomy than for a woman to have a tubal ligation.  Usually a vasectomy is performed when a couple wishes to stop using other forms of contraception such as the oral contraceptive pill, IUD or condoms and do not want any more children. If you or your partner is not sure whether you want more children or not then this is not the contraceptive choice for you.

No, the fluid ejaculated during sex will appear the same. Less than 10% of the ejaculate volume is sperm. The great majority of seminal fluid is from the testes and prostate, which still comes out of the penis after a vasectomy.

How reliable is a vasectomy?

Vasectomies are very reliable but all forms of contraception have a failure rate. The failure rate is about 1 in 1000 people. Failure occurs because the tubes re-join. This spontaneous re-joining of the cut ends can occur early or late. There will be no change in the volume or colour of the ejaculate to warn of this. Sometimes failure is early, and this is usually picked up in the post surgery semen tests. However sometimes the re-join occurs late, and this can then lead to an unexpected pregnancy.

Failure rates for various forms of contraceptive are listed below.

How is a vasectomy performed?

Vasectomy is performed under local anaesthetic. One side is done at a time, usually through separate small incisions. The surgeon holds the vas or tube up under the scrotal skin, places some local anaesthetic under the skin and into the vas itself. Then the skin is pierced with a sharp instrument and the opening in the skin is stretched. The vas is then grasped in a forceps pulled up a little bit and divided. This can be done with a knife, scissors or diathermy. The ends of the vas are tied off and the vas allowed to go back into the scrotum. One small stitch is placed in the skin opening at the end.

What is a no-scalpel technique?

In a "no-scalpel" procedure a small sharp pointed instrument is used to pierce the skin. By piercing the skin the  "no-scalpel" technique has less risk of bleeding than if the skin was cut with a scalpel.

What happens to the sperm after the vasectomy?

After a vasectomy the testes still make sperm. The body breaks down this sperm again after a period of time. This happens normally if a man has not ejaculated for some time. Cells being broken down and reabsorbed is a normal process.

Can I have unprotected sex straight away?

No. Sperm lives downstream from where the vas has been tied off. This sperm takes many months to die or be ejaculated out of the system. You need to do semen tests for sperm after your surgery and are safe only when two consecutive samples show no sperm. The first test is at 2 -3 months after your surgery and the second one month later. You should receive a letter from me confirming your sterility.  Until you have two negative tests you need to keep using another contraception method.

What if the sperm do not go away?

Occasionally sperm remain long after the operation. If these are a very few always non-motile sperm then it is thought safe to have unprotected intercourse. In general, however, I offer a repeat vasectomy, just in case the vas deferens tubes have re-joined.

If the sperm are motile then the vas have re-joined early and a repeat vasectomy under a general anaesthetic is recommended. This is very rare but one of the reasons for having post vasectomy tests.

What can go wrong?

The risks of any operation are pain, swelling, bleeding or bruising, and infection. With a no-scalpel technique bleeding is rare and bruising is usually only a small amount. Swelling will occur and takes a few days to few weeks to settle. Infections are very rare; you will receive one dose of antibiotics at the time of the procedure and should not need anymore after. Specific post vasectomy problems are:

Does a vasectomy increase my risk of cancer?

No. Sometime ago people wondered if a vasectomy might increase the risk of getting prostate cancer later in life. This has now been shown not to be true. There is also no increased risk of testicular cancer.

Can I have it reversed later if I choose?

Yes, but if you are thinking about a reversal now then perhaps a vasectomy is not right for you. Reversal is not always successful, is expensive and needs a general anaesthetic. Success is most likely in the first 5 years after a vasectomy. Given that life does change and a reversal after 10 years is usually unsuccessful vasectomy for people under 30 is probably not the best contraceptive choice, unless your partner has health issues which make having children a major problem.

An appointment on the day of your vasectomy will be made to go through the operation. Please let me know if you have a history of

You should shave your scrotum the morning or night before your operation.

You and your partner (if they attend and they are welcome to watch the procedure) will be asked to sign a consent form for the procedure confirming that you understand the procedure, it's planned effect, side effects and need for protection till you have had a series of tests showing you are infertile.

Avoid aspirin for a week prior to the procedure.

Bring some tight clean underpants to wear after.

You do not need to fast.

It is nice to have someone drive you home after but not essential. If you tend to faint then it is a very good idea to have a driver. 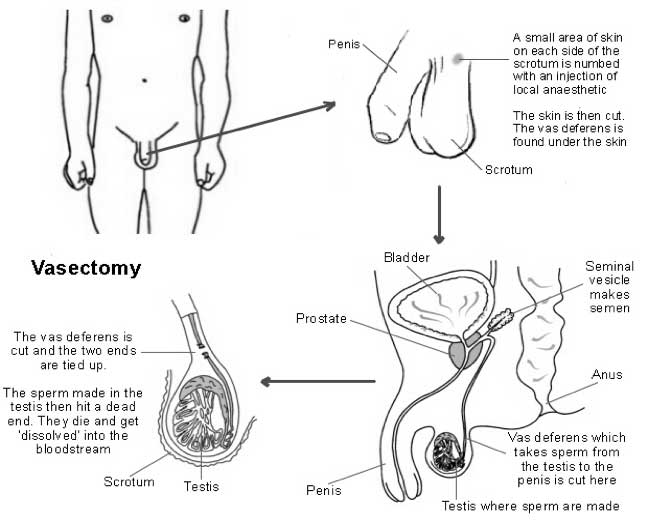 Pain and mild bruising should be expected. Take 2 paracetamol 4 to 6 hourly and some diclofenac or ibuprofen (brufen) if needed. Sometimes an ice pack or a bag of frozen peas may help reduce swelling. This is most helpful in the first 24 hours after the procedure.

There maybe some ooze from the skin. This will settle. If there is a stitch present this will dissolve.

You can shower the day after your vasectomy. Wait a few days for a bath.

When can I go back to work?

You should take the day of and the day after surgery off work. Typically I book operations for a Thursday so you have the weekend as well to fully recover. You will however be sore and a little uncomfortable for a week or so.

When can I have sex?

You can start having sex again as soon as you feel comfortable. For most men this is about a week after surgery. Keep using your normal contraceptive until your semen tests show you are infertile. Your first test is usually 12 weeks post-vasectomy.

What if I have a problem?

Post-vasectomy symptoms are usually mild and common. If you are worried however or have a large amount of swelling or bruising please call the rooms on 07-8580753.