What is a TURP?

Transurethral Resection of the Prostate (TURP) is an operation to make men pass urine (pee) better. It removes prostate tissue so the tube that you pass urine (urethra) through is wider. This is colloquially called a rebore.

The prostate is a gland that lies below the bladder and surrounds the urethra.

Why do I need one?

Does this mean I have cancer?

How is it done?

The operation is done under a general or spinal anaesthetic in an operating theatre. The surgeon passes a telescope into the bladder down the eye of the penis and looks at the prostate. Usually there is prostate tissue blocking the urethra and this needs to be cut away.  Fluid is used to wash away any bleeding during the operation. At the end of the operation the prostate chips are flushed out of the bladder and a catheter put into the bladder through the penis. This will stay in for 1 to 2 days after surgery. 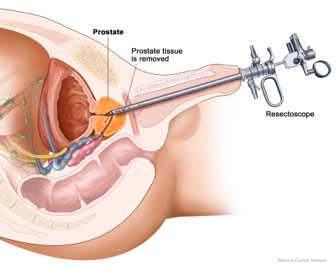 A telescope is passed through the penis into the bladder 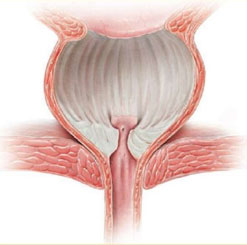 Will I have a laser?

No.  There are many different ways of cutting the tissue out; all need some form of energy to do this.  The standard way is to use an arc current passed over a wire. This is a very common method of cutting and cauterising tissue and is used for tissues in all parts of the body.  This is regarded as the "gold standard" to which other methods are compared. Other options are using a laser current (greenlight or holmium or thulium) or a bipolar current (gyrus) or a very high-energy setting (TUVP).

There are various differences between the laser options but in general laser surgery has less bleeding but more irritation and more post-operative pain and discomfort. Holmium surgery requires the prostate chips to be chewed up by a device called a morcellator, which can occasionally eat through the wall of the bladder.

Because laser surgery does in general have less bleeding it is the preferred option for haemophiliacs and patients with metal heart valves who must be on anticoagulants. If this is you, then you will be referred onto a doctor who specialises in this technique.

What can go wrong?

The operation is usually very safe. The commonest problems are bleeding and persistence of symptoms. Usually this is not severe. It is extremely rare to need a blood transfusion.  Although the literature suggests a blood transfusion rate , I cannot recall transfusing a single patient for active bleeding since becoming a consultant more than 10 years ago.  The difference is partly because the literature reports all surgery (trainee and specialist) and may be somewhat historical (out of date).

Infections can occur, these are more likely if a catheter was in place prior to surgery. Antibiotics are given in theatre to reduce the risk of this occurring.

An extremely rare event is TURP syndrome. This occurs when the fluid being used to wash the bleeding away is absorbed into the body. This is more likely to occur if the prostate is very large and the surgery goes over one hour of resecting time. Again although the literature suggests a rate of .....% I have not yet had a case as a consultant, again because this is more likely to occur in inexperienced surgeons hands.

In summary the commonest side effect of the operation is retrograde ejaculation and some bleeding. Other possible complications are

How long will I be in hospital?

The typical length of stay is 2 days. Fluid is used to wash away the bleeding for a day after surgery. Then the catheter is removed on day 1 or 2 post surgery. Once the catheter is out, you need to pee several times before you can go home.

What are the alternatives?

If you are able to pee, and are not in retention, then pills should be tried first. These are designed to relax the muscle fibres in the prostate. A second type of drug can shrink the prostate (finasteride). If you cannot tolerate the pills, or they do not work then an operation is a good option.

In some men the flow rate is so poor that surgery is the best option regardless of medication. For these men an earlier rather than a later operation is the best option. If you cannot pee and have a catheter in then you should have a trial removal of the catheter first, before having surgery. If the catheter can be removed and you have ongoing problems passing urine then surgery is usually helpful. Surgery without a catheter present has less risk of causing an infection.

Do I need to stop my aspirin?

No, in general you should stay on aspirin through any operation.  You will have a little more bleeding, but less risk of a heart attack than if you stopped it. The exception to this is if you are on aspirin simply because you thought it was a good idea in which case you should stop it 10 days before surgery.

I am on warfarin or dabigatrin does that matter?

Yes. Please discuss this with your surgeon. If you are on warfarin or dabigatrin for AF (funny heart rhythm) then in general you should stop these pills before surgery. Warfarin is stopped 5 days preop and Dabigatrin 2 days before surgery.

What about other pills?

If you are on a blood thinner following heart surgery or a stent such as Plavix, then you need to discuss this with your surgeon. Most other medications should be continued.

My operation was not successful, why and what now?

If you did not have a catheter in place prior to surgery it is rare for the surgery to be unsuccessful. If this is the case then two possible reasons are

In both cases a test called urodynamics may reveal the cause for the surgery to have failed and further options can be explored.