PSA is a blood test used to look for or screen for prostate cancer.PSA is a normal part of the fluid made by the prostate so all men have PSA in their ejaculate (semen) . It helps to break down the seminal clot so the sperm can swim away and try and find the egg. A very small amount of PSA leaks from the prostate into the blood and can be measured in a blood test.

What is a normal PSA value?

So all men will have some PSA in their bloodstream and on testing.  As the prostate enlarges more PSA is made and more PSA leaks into the bloodstream. This means that there is really no normal value for PSA, but should relate to the size of the prostate. As this is hard to measure accurately most doctors use age-adjusted PSA on the basis that younger men have in general smaller prostates and older men larger prostates. For men under 50 PSA should be less than 2.5, men 50-60 below 3.5, 60-70 4.5 and over 70 below 6.5.

What causes the PSA test to be increased?

The level of PSA is increased by many things, only one of which is  prostate cancer but conversely some prostate cancers do not cause an increase in PSA. So a rectal examination to feel the surface of the prostate should also be done with a PSA blood test. The commonest cause for a raised PSA is an enlarged benign prostate, other causes are inflammation, and catheterisation. Although unproven it is probably a good idea to do your PSA test more than 48 hours after sexual intercourse and 48hrs after riding a bicycle.

What other blood test can I have?

PSA belongs to a class of compounds called proteases, that is they break down proteins. To stop this happening about 75% of the  PSA released by normal prostate tissue is bound to a carrier molecule and 25% is not, this is called free PSA.  For reasons that are unclear prostate cancers tend to release more bound PSA than free PSA. This can measured by a version of the PSA test called a ratio test. Free to Total PSA ratios below 12% mean a 1 in 2 chance of having prostate cancer, while a ratio test above 21% carries a low risk of prostate cancer.

Do I need to starve for a PSA test?

No, but you should try and not have sex for at least 2 days before the test, and maybe not ride a bike for a few days. Both activities may squeeze PSA out of the prostate and into the blood stream, causing a false rise (elevation) in the PSA test. Sex or a biopsy it's a difficult choice.

For a longer discussion on PSA, and PSA screening please see 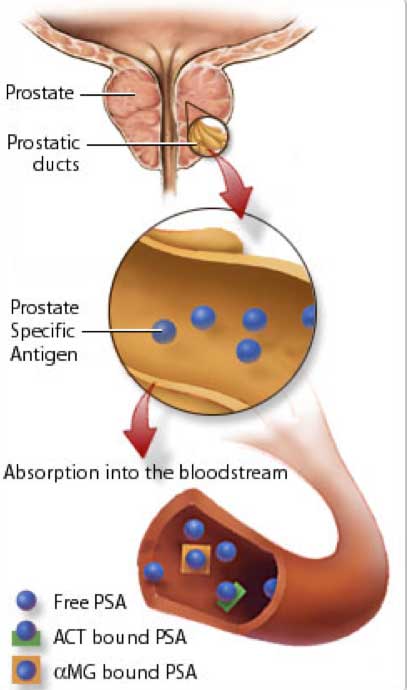 PSA is made in the prostate, and excreted into the ducts of the gland. A little bit slips through the wall of the ducts into the blood stream where it can be measured.

In the blood stream it exists as both free PSA and bound to carrier molecules, the ratio of free PSA to the total PSA is called a ratio test.

In a normal prostate very little PSA leaks, in prostate cancer it is thought that the PSA can leak easier into the blood stream, leading to a rise in the PSA blood test.