I have a bent penis why?

The usual cause of a bent penis during an erection is Peyronie's disease.

What is Peyronie's disease?

Peyronie's disease is a caused by benign scar tissue inside the penis. This occurs in the layer that wraps around the erection tissues of the penis. During an erection the penis stretches. The scar tissue cannot stretch and this causes the penis to bend towards the scar. 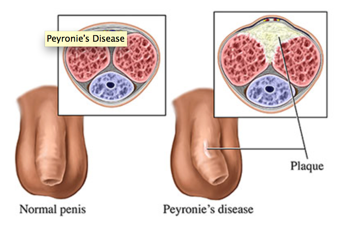 What are the symptoms?

Peyronie's disease causes a lump or scar tissue under the skin of the penis. During an erection the penis bends towards the lump. Typically the penis bends up, sometimes sideways and very rarely down. This bend can make it difficult to have sex.  Sometimes the scar tissue is painful. Pain usually goes away over 6 to 12 months. The bend unfortunately does not. The penis may appear to shorten as it bends. 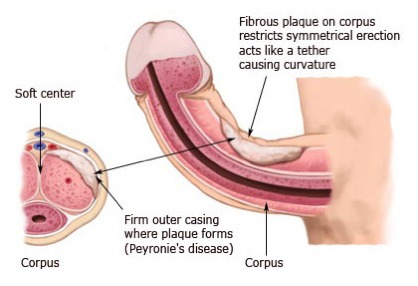 The cause is unknown. It is a form of dis-ordered connective tissue scarring, similar to Dupuytren's contracture in the hand or plantar fasciitis in the foot. It is thought that repeated micro trauma during sex leads to abnormal healing and a scar forming. It is more common if a relative has it and if you have scleroderma. Very rarely it is associated with autoimmune diseases such as SLE and Sjogren's syndrome.

Peyronie's disease can also form after surgery for prostate cancer. It seems that the lack of erections (perhaps through low oxygen levels in the penis) leads to a scar forming.  Most men who get Peyronie's disease are in there fifties. No-one knows why.

Will it go away?

Unfortunately no. The bend and lump stay. The pain usually settles over time.

How is it diagnosed?

Peyronie's disease is diagnosed by the combination of a flat lump in the penis, a ben d with erections and pain. The scar tissue usually can be felt. Very rarely an ultrasound is taken to look at the scar tissue if there is any doubt over the diagnosis.

Will it get worse?

For most men by the time they present to the doctor it is as bad as it is going to get. The process of scarring and bending takes place over about 6 months. Pain is often a sign that the process is still ongoing, and surgery should not be performed until the pain has settled.

What are the treatment options?

If you are able to have sex and the penis is not too sore then doing nothing is often the best option. There are a number of pills that may work but probably do not. The best of these is Acetyl L Carnitine. The dose is 1 gram twice a day.  Vitamin E pills and cream have been suggested but probably do not work. Other medications that have been suggested are colchicine and Tamoxifen.

How does a stretching device work?

Several traction devices are available to stretch the penis. They are based on the idea that constant slight stretch will soften the scar and make it longer thereby reducing the bend in the erect penis. By themselves they may work but they require the penis to be in traction for a long time everyday. They maybe best used with Xiaflex or verapamil injections into the scar.

Is there an injection that works?

There are two injections available. Verapamil when injected into the plaque may soften it and improve the bend. You need to have about 12 weekly injections. At each injection session multiple small injections are made into the plaque under local anaesthetic. It is not clear if this works.

Xiaflex is not yet available in NZ. It is the only FDA approved drug for Peyronie's disease. It is a collagenase, that is, it digests the tissues. A single injection is made into the scar across the length of the penis. This is repeated several times and the hope is that this creates a weak point, which then opens a bit like a hinge. This treatment works, but is very expensive and available only in America at the moment.

A traction device on the penis. The base is hinged

When should I have surgery?

In general surgery is used only if the bend is so bad that you cannot have sex.  The reason for avoiding surgery is that it will cause the penis to shorten and can cause a dimple or "waistcoat effect" on the side of the penis.

What operations are there for Peyronie's disease?

If you are getting erections then there are two operations that you can have. The more common operation is called a Nesbit's. In a Nesbit's operation a surgical tuck is put in the side opposite the scar. This straightens the penis out but loses length. This is called a plication operation. The second operation is to open the scar up and put a tuck in the opposite side. This can be combined with a graft. This causes less loss of length, but may cause a divot to appear on the operated side as we swap width for length on the side with a scar. Erections can be weaker after this operation. It is usually used if the curve is very bad or loss of penile length would be very bad.

If you are getting poor erections then the best option is to have a penile prosthesis fitted. This preserves penile length and straightens the penis but means that you have a hydraulic cylinder inside the penis. 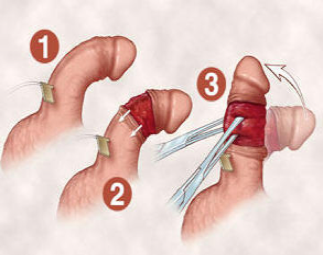 In a Nesbit's operations a series of tucks are made in the side opposite the scar. This straightens but shortens the penis. 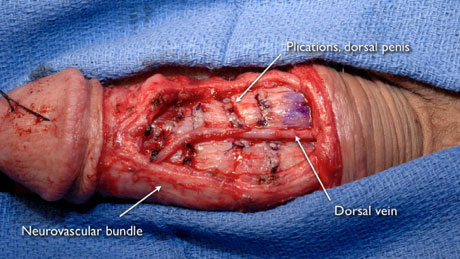 The end result is a series of sutures. These can often be felt afterwards as small lumps or scars.

Where can I find further information?