The kidneys are bean shaped organs, which sit at the back of the abdomen, up under the rib cage and make urine. A person usually has  2 kidneys and a cancer can arise in either one. You can survive happily with only one kidney. Kidney cancers are called renal cancer and the  commonest type of renal cancer is called a clear cell cancer. There are many different ways to deal with kidney or renal cancer, but almost all involve surgery. Chemotherapy is only used when metastasis are present. 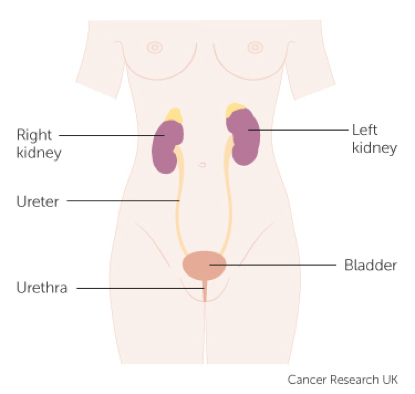 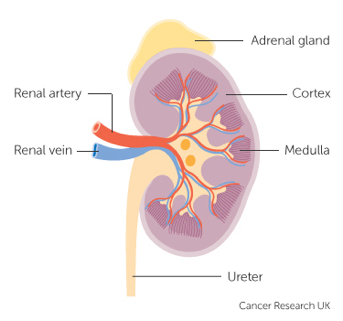 The Kidney usually has one artery and vein, but can have extra arteries and veins. The adrenal gland sits above the kidney and is usually left behind when the kidney is removed

What are the symptoms of kidney cancer?

Kidney tumours are usually found by accident, often after an ultrasound scan. Sometimes they are found after blood is seen in the urine. 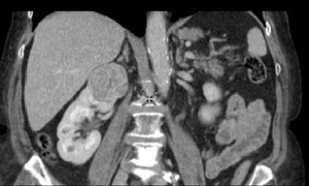 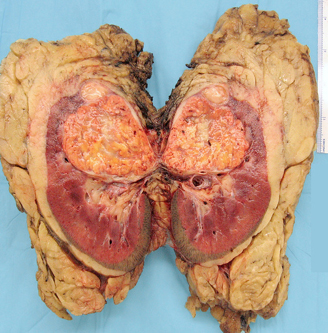 What types of kidney cancer are there?

Kidneys are made up of a complex group of cells. Different parts of the kidney can give rise to different cancers. The commonest tumour is a clear cell cancer. This arises from the cells that help make urine.  Other less common forms are chromophobe and papillary cell. Occasionally a cancer arises from the cells, which line the inside of the kidney. These are called transitional cancers or TCC's. If a TCC is present then typically the whole kidney and the ureter, that is the tube from the kidney to bladder, are removed, rather than just the kidney itself.

Are all kidney cancers the same?

No, the commonest type is clear cell (75%). The next most common is papillary (15%) and the least common is chromophobe (5%). There are several very rare cancers, which occur in less than 1% of affected people. Papillary cancers are a little more likely to be multiple, and chromophobe cancers have the least risk of coming back (recurrence).  Under a microscope we can  see the different cancers look different and we now know that they are caused by different gene problems.

Are all tumours in the kidney malignant?

No, oncoytoma's and angiomyolipomas are not cancers.  An Oncoytoma is a benign tumour that is they can grow slowly over time but do not spread to other organs. It can be hard to differentiate oncytomas from papillary cancers. On x-rays oncocytomas can have a spoke and wheel pattern. If this is seen then a biopsy may be taken of the lesion before considering surgery. If the biopsy shows classic oncocytoma then the surgeon may choose to follow the lesion rather than remove it. 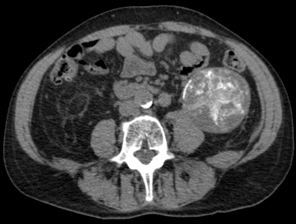 A CT scan of an oncocytoma showing a spoke wheel pattern. The cut specimen shows the central stellate scar often seen in an oncoytoma. 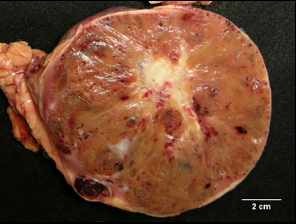 Angiomyolipomas (AML) are a benign collection of normal cells. They can occur by random chance or as part of a condition called Tuberous Sclerosis. If the AML is over 5cm in size then there is a risk of spontaneous large volume bleeding and the AML is usually treated by having an x-ray doctor block off the blood vessels supplying it. This is called selective embolization of the lesion. AML's typically have a bright white appearance on ultrasound. This is caused by the fat in the lesion. If fat is seen on a CT then we assume the lesion is an AML rather than a cancer. 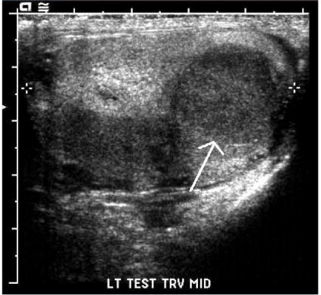 The small bright lesion on the ultrasound is an AML

Most kidney cancers arise from random acquired changes in DNA. In clear cell renal cancer a gene called the VHL gene is often affected. Smoking and being obese increase the risk of renal cancer. There are some rare conditions which cause cancer. One is called Von Hippel Lindau disease. In this condition many small renal cancers occur. People with mismatch repair gene defect (MMR gene defect or Lynch syndrome) are at higher risk of getting TCC's of the kidney. Patients with renal failure on dialysis are also at slightly higher risk of getting kidney cancer.

What type of surgery will I need?

Can I be treated without surgery?

Yes. If the renal lesion is very small it may just be followed. Lesions under 3 cm in size grow slowly and are not always cancer, so a careful surveillance programme maybe suitable.

Small cancers can also be frozen or cooked. This is called cryotherapy if the lesion is frozen and microwave therapy if it is cooked. In patients who are frail, elderly or have poor renal function then this maybe a suitable approach. In general, however, it is still thought best to remove lesions, which are thought to be cancers rather than treat them where they are in patients who are younger or well. This is because of the risk, of recurrence if the lesion is not completely killed by the cooking or freezing therapy.

Should I have chemotherapy?

In the last 10 years several new drugs for renal cancer have been developed. Although they cause the cancer to shrink they do not kill all the  renal cancer cells. They are therefore used only when the kidney cancer has spread to other organs to shrink the cancer. These new drugs are usually a pill not an injection, and work best for clear cell cancer.

The first new class of drugs was based around blocking the VHL gene. These drugs are called TKI drugs (tyrosine kinase inhibitors). The first of these was sunitanib (Sutent). This is funded in NZ if you have clear cell cancer. A second related drug is sorenib, this maybe funded if you are intolerant of sutent.  A second class of drugs called m-Tor inhibitors are available but not publically funded in NZ . The first of these is called temsirolimus.

Where can I get further information?