I have a lump in my scrotum does this mean I have cancer? 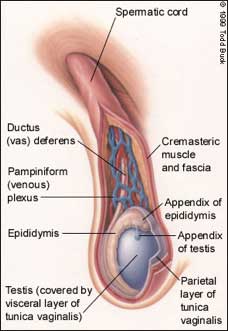 The testis lies within a sac called the tunica vaginalis, with the epididymis above and behind it.

What are hydrocoeles and epididymal cysts?

A hydrocoele forms when fluid builds up in the sac, which surrounds the testicle. Usually there is a very, very thin layer of fluid between the layers of the sac (called the tunica vaginalis). This fluid acts as a lubricant and allows the testicle to move up and down. The fluid is made on inner side of the sac and absorbed on the outer side. If this fluid doesn't drain properly then it builds up and forms a collection. This surrounds the testes so usually you cannot feel the testicle. 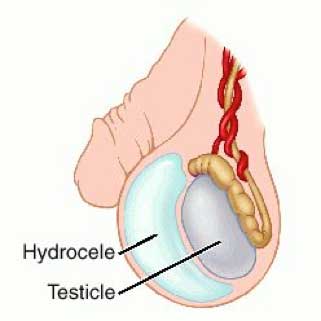 A hydrocele is a collection of fluid in front of and around the testis.

An epididymal cyst is a collection of fluid in a small sac attached to the tube at the head of the testes. Usually there is more than one cyst initially but one grows bigger than the rest. Epididymal cysts usually feel like a smooth soft marble above the testes.  They are usually next to the testes and can be felt separate from it. 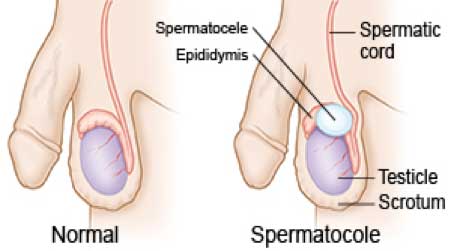 Epididymal cysts are separate from the testis. They are sometimes called a spermatocoele as they can contain sperm

Will it get bigger?

Most times yes, but this can be very slow.

Do I need any tests?

No, although it is common to do ultrasounds on the scrotum, the diagnosis can usually be made by how it feels and by shining a light through the fluid collection. A bright light should pass through the hydrocele or epididymal cyst.

Can they become a cancer?

No. Very, very rarely a hydrocoele can occur with atesticular cancer, so that although a hydrocoele can be worked out without an x-ray, often an ultrasound is used to make sure the testes under the hydrocele is normal.

How are they treated?

If small they should be left alone.

If medium-sized then they can be drained. Now they will come back unless a fluid is put in to scar up the sac. This is usually very concentrated alcohol. Sometimes a second treatment is needed.

If large then surgery is probably the best option. This has a small risk of recurrence (10%).

For a hydrocele the sac around the testes is trimmed away. The fluid is still made from the testes side but this is now free to be absorbed by the scrotal tissues.

A varicocoele is a varicose vein of the gonadal or testicular vein. They usually occur on the left-hand side. They are often described as a "bag of worms". They can be felt as a slightly ropey feel to the tissue next to the testes. They are more obvious when standing up, such as in the shower. 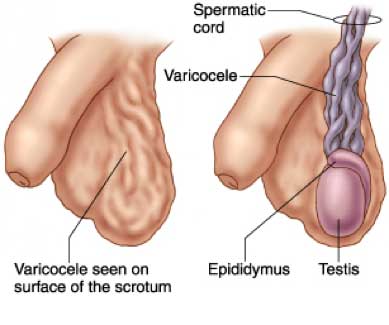 Can a varicocoele cause infertility?

This is still debated, but it is very unlikely that varicocoeles cause infertility. They are seen in patients with infertility, but operating on them very rarely makes the sperm numbers really improve.

How is a varicoele treated? 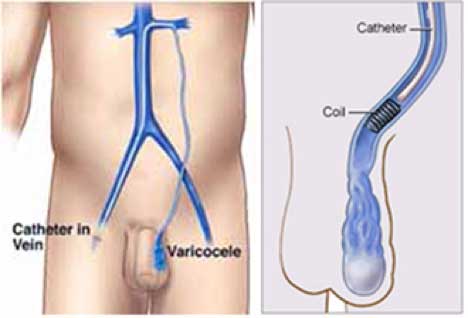 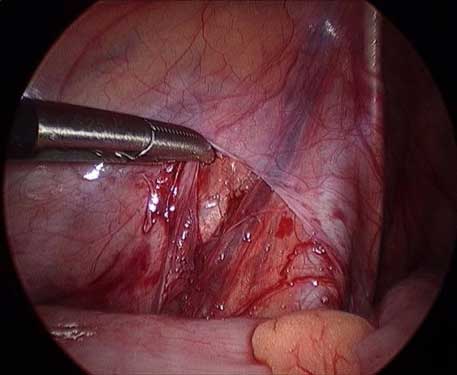 A laparoscopic view of the gonadal vein and artery. The surgeon will place a clip over the vein soon.

How successful is the surgery?

All operations/procedures for varicoceles have a failure rate and a recurrence rate. This is about 10% for the procedure to not fix the problem, and a 10% risk of recurrence.

Where can I get further information?